“I think you should be able to handle this, just remember, it has no brakes...” These were the words the owner of this unit told me as he handed me the keys. In hindsight, I should have probably heeded the warning and gracefully handed back the keys… but HERE WE ARE, talking about a car that was hell-bent on making sure I don’t make it back...
My bio states I love cars, I don’t know if this qualifies as one. It had three wheels and its officially known as Piaggio Ape. FUN FACT, they also make planes (they really like three wheels huh). Usually, this is where I talk about the engine specs and what not but sadly, I didn’t seek all that information. 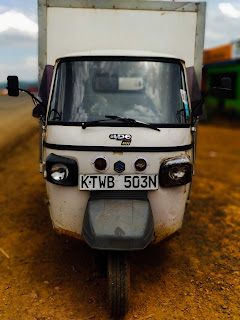 Let’s just jump straight into my experience with this car. The Ape is one weird machine, here is why. Did I mention it has three wheels? That aside, its steering wheel looks like that of a motorbike. Now, this sounds like information you had but the weirdness doesn’t stop there. The brakes are on the floor, and the accelerator is at your right hand. It is manual and the clutch and the gears are on your left hand. This was by far the strangest bit because this means that to change gears you have to actually move the whole clutch. Somehow, these guys couldn’t just stop there with the weirdness, to engage the first gear from neutral, you move the whole handle clockwise from its neutral position, but from gear one, you have to move it anticlockwise, thru' Neutral then to 2nd…. I mean?? Come on people!  From there it continues anticlockwise till the fourth. Piaggio WHY?? Was all that necessary?? (And the reverse gear is a lever under the steering wheel. Tsk)


Driving it is a what I would describe as light to medium weight lifting depending on the terrain you are on.  The steering wheel is so damn heavy. Also, it is REALLY HARD to get on the main road from a dirt road. The 3 wheels make it a whole other experience, (think about it). The ride is not what I would describe as comfortable neither is it sustainable over any considerable distance. It’s really bad. Piaggio what did you do to the accelerator? I mean the amount of travel on the accelerator is almost non-existent making it feel like a switch, ON/OFF. You are either not accelerating or on full throttle,  balancing that with the clutch is a hustle.
Oh yeah, it nearly killed me too. How you ask? Well, the on and off accelerator mechanic doesn’t work very well for hill starts and since the majority of the weight is at the back, the front ended up being suspended on the air for a while. How it didn’t end up flipping is something I can’t explain but for now, let us credit my wit and bravery.  Oh yea, the lack of brakes was also a minor inconvenience, it came along with one or nine near misses... nothing the captain couldn’t handle.
Experiencing new stuff is always fun, but next time someone tells you they have no brakes, just don’t drive that car. Yea, I also don’t know how he manages it but somehow, he does.
My thoughts on this car?? Hehe, I mean it does things...
So you have a few minutes to spare? Here is a link to a random article.