There is a Sub Trezia running around looking like a Ractis... and that's because it mostly is a Ractis... I don't even want to get started on what agreement led that but it exist. (The design team did not do a very good job on this car, it is borderline unispiring and frankly just dull)


So what does this little car have to offer?

You have probably seen it, it’s a small car, a small city car to be accurate. This information is necessary as the conditions I tested it under did not flatter it one bit.
Let's try paint a picture; Imagine how the Ractis looks like, right? You have it in mind? Good... Picture it with 5 adults in it... Let's not forget their luggage now!!... Is the picture vivid in your mind?

Trust me, it was way more cramped than you think!

We left Nairobi at around 11:00pm and heading to HomaBay county… (not a short drive by any standard). Having that in mind we can now get into the details of how the car performed....

The car had a 1500cc, 4 cylinder engine sending power to the front wheels through and automatic gearbox. I mean, at first glance the engine looks sufficient for a car of this size, but factoring in the distance and the load it had to endure… Yea the engine struggled, a lot!

Hey, we did make it to our destination, at around 6:00am, and I see that as an absolute win.

Our trip was majorly characterized by the engine making a lot of noise and us not making enough progress to warrant the noise. (Again, to be totally fair, I wasn't expecting much given our predicament). The car is economical  and this gave me the confidence not to shy away from creating contact between the accelerator pedal and the metal on the floor.

Moving away from the immense lack of power, I was mostly in the driver's seat and the one time I sat at the back, it really wasn’t that good. It’s not a very roomy car and neither is the ride very comfortable. 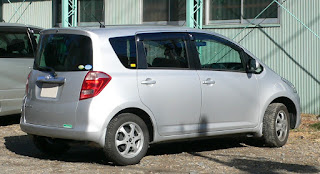 Actually I feel like ending this article here because apart from it being a car... there really isn't much to it, so let me wind up.

This is a city car, suitable for short travels and factoring in its size, fuel economy and it being a fairly cheap car to run, it actually fits the bill.
Conditions we subjected it to, left an awful taste in the mouth.
It will probably handle whatever punishment you throw at it (let's not forget, it's still a Toyota), but you will have to compromise on one or two things.

Overall, for a City car, yes, by all means, grab one, (it might make a case for a first car maybe) but anything past that, yea, i'd highly recommend you look somewhere else.

(This car really isn't exciting... but bottom line is, it gets the job done for most people... I am not one of them but I am okay with that)