- August 26, 2020
The Toyota Axio…
A car loved and cherished by Uber..? NO? Eer, it's fair to say this car is not a head turner in any way, shape or form. I don’t think people actually like it that much, but somehow it sells.
Well it got my attention and here we are. That can only mean there is something about it that made it warrant a review.

To be completely honest, I ended up driving this car because the other option was a Nissan Tiida. Given I was travelling from Nairobi to somewhere past Kisumu, I figured the Axio was the lesser evil. I barely slept the night before, so being the model driver that I am😆, I started driving from Nakuru all the way to my destination.
Starting with the amount of room available in the car, I sat in the co-driver's seat and honestly there
isn’t anything mind blowing to report about. Also, after some research on this unit, it turns out it's just a Corolla underneath but with some size restrictions. That applies to the engine size too, but more on that later. The room is barely standard but not awful enough to make the long trip unbearable, (it felt bigger than the Tiida option). The center console is uninspiring and to be fair, I didn’t expect it to. You get these basic Japanese radios that will produce a sound…

The ride was okay, and I say that for lack of a better word. It wasn’t harsh and neither was it a place I
wanted to be after 8 hrs. Stay with me over the next paragraph and lets break down my assessment.
The engine… Right!
The car had a 4 cylinder 1.5l (or 1500 cc) engine, which performed better than I expected. Before taking the wheel, I had very low expectations of the engine. Let's just say the engine surpassed my expectations, NOT by much though. The restriction is to keep the engine under 2l for this Corolla variant.  The math involved in overtaking while driving this car needed some re calibration. There is no way you are accelerating fast in this. (This is the car equivalent of " if you were in a hurry you should have started your trip yesterday). Doing 100 kph on a steep hill felt like an achievement given the amount of strain involved! All that said the car was getting the job done. I had to tune my mind to be in sync with what the car could offer. Knowing what amount of speed you need coupled with the amount of power you needed to get whatever you want done on the road. I can report, this car got us to our destination doing the best it could under the strain my right foot put it thru.
The biggest win for the AXIO was its fuel consumption. This is probably its main selling point and probably explains why it works so well as an uber or a taxi. I mean I knew it would be low, but it was really low. This surpassed all my expectations and getting to my destination and seeing how much fuel I had left, really did put a smile on my face. (I didn't get around to doing the actual math but that is information available out there) 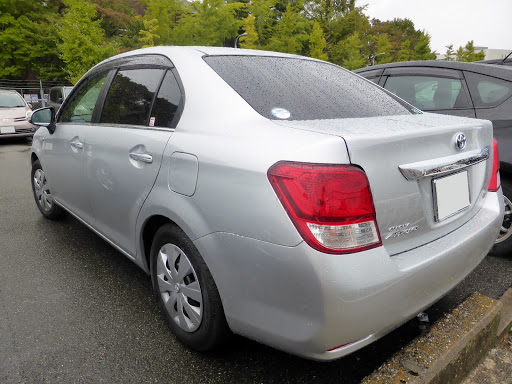 Lets wrap this up shall we. The Axio… I wouldn’t buy it. I don’t think I would recommend it to someone else. (Okay maybe I would but that would depend on a lot a factors). All that said though, this is by no means an awful car and you will be "safe" buying it (I mean its a corolla... with fewer steps). There in lies the problem, this is a "safe" car and there are a whole lot of those going around. Cars ought to be more than this, but that is a rant for a whole other article.
This is a Toyota, so factor in all the advantages that come with that badge.It is fairly cheap to run and beyond that, it will get the job done. As for me and my preference, I want more than that. I need more what the Axio offers in a car.
Oh yeah, Remember to sanitize and maintain social distancing
Axio Toyota