Now before you crucify me for daring to make this comparison, hear me out... Please... 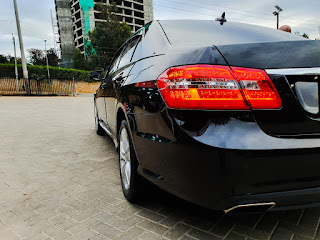 Right, I have no idea how this article is going to go, but I am excited nonetheless. Out of the cars I have reviewed, I happen to have used the Crown the most. In all fairness, this is no average car and I think it had genuinely ruined my driving experience. Almost every car that came after this always felt like a disappointment. The cars were underwhelming and the excitement was no longer there. The Crown spoilt me, making me entitled to demand that level of performance from every other car. As you suspect, not many cars matched up to that. Today however... hehe... Today is a good day. We have a big boy in our blog. The question is, will it measure up??

The idea initially was to compare the Crown to the C200 Merc, but after today, I see no need because I am convinced beyond doubt that the C200 cannot compete. Reason being, I got my hands on an E-class, to be specific the E250.

Let's go thru the boring bits quickly, this was a 1.8 litre, four-cylinder turbocharged engine sending its power to the rear wheels. There... Now let's talk about the experience.

Oh yeah, I will not talk too much about the crown again, Read the full article here!

First off, this car looks good. This car has been around for a while but still turns heads in the streets. This car commands and demands respect, I mean for once I was on the road and everybody was letting me have my way. Even matatus didn't want smoke... they knew! Even the cops smiled and waved me by... I mean... This though had a lot to do with the badge displayed at the end of the fairly long hood. That aside, the car is pretty low and clearly comfort was given first priority by the design team at Mercedes. People it's an E-Class, the inside is a pretty special place to be.

How does it feel to drive though??

I will be the first to admit, I have not had an experience with a turbocharged car before. (I mean I have driven turbocharged HINO 300, does that count? drop a comment, let me know).This is a rapid car... and I say this with a lot of envy for those running around with the more powerful E350. The turbo is so addictive. I mean it takes some time to get going but from around 2000rpm, the power surge when the turbo kicks in is where the fun lies. And Merc has done some tuning on the exhaust, when the car in the Sport setting, the exhaust... how do I put this... the exhaust makes sounds that are purely meant to awaken the inner child in you... the sound isn't crazy, but just sporty enough to get you all excited... Oh, I liked it.

The whole time I was driving this car, I kept on thinking about the 3l Crown. Is this a better buy? Now this will do 0-100 in the 7s range. The turbo lag in this gives the naturally aspirated Crown an edge at the start but the merc compensates for this lag by the insane power the turbo gives it. On paper, their 0-100 times are more or less similar and I might go ahead and say it could easily go both ways.

But during my numerous sprints with this car, I couldn't help but feel the 1.8l engine straining. I mean the power was there with the turbo, but the naturally aspirated 3l crown felt smoother. The acceleration felt effortless and not as strained. You have to keep in mind, ath the end of the day this is a big sedan being hauled around by a 1.8l engine, there is no getting around that. This feeling wouldn't go away, nomatter how exciting the turbo was, it still didnt feel as powerful. On further inverstigation, I came to realise the Crown had the E250 beat in power, around 200hp to 256hp respectively. It's not much but you can tell the slight difference when you put the foot down.

Oh don't get me wrong, I would much rather be in the Merc but All thru this experience, I kept on thinking, there really is no replacement for displacement. What I mean by this is, smaller turbo charged engines will never realy matchup to the naturally aspirated counterpats.

That said, this car excels on the fuel economy front. The already small engine is accompanied by an eco mode which makes it ver efficient. So if you see -this car running around, rub the notion that it is a guzzler because it isn't. It will keep up with your big V6 or V8, it will be just as comfortable and will save way more fuel. Yeah, that's German engineering for you. 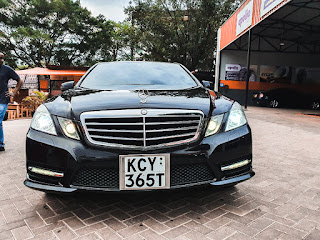 The features loaded in this car are a lot and I don't want to get into them because the article has gone on long enough. But I will definately do a dedicated piece on this car and the features it has.

I love this car, I love the performance, I love the sport mode that dials everything to 11, I love the fuel economy, I love it's presence, I love the comfort. Really this is the dream... But with this level of sophistication, there comes a downside to it. I mean all sounds too good to be true right? Well yeah, This car is not cheap to purchase... And if you somehow secure that bag and get one of these, the maintenance cost is a whole other conversation. So are these two caveats worth the trade?? Depends really...  My job is to give you both ends of the spectrum. This car is refined and has the crown beat on so many levels, but dont be fooled, The Crown isnt that far behind!!!!! You should grab one of these if money is not a problem because it is all the car it's build up to be. I would steer you towards the Crown because to be fair, you really aren't missing out on much.